This article combines 'Back Chat Eats Out' with 'Travels With Back Chat'.   Eating and travel are two of Back Chat's favourite things.  It is the story of two special  experiences that Eugene and I enjoyed during our New England odyssey: 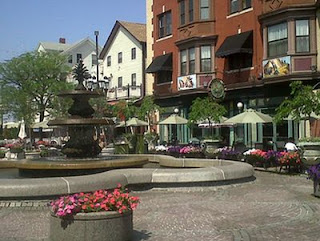 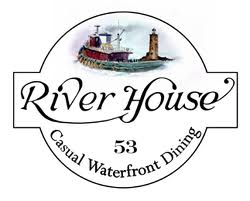 The genesis of this story is an email that I received about three years ago.  At that time I was writing for a friend's website.  An article I had written about the love affair Eugene and I have with the South of France, 'Rendezvous on the Riviera, A Month in Mougins', had been published on the 12th of March 2009.  In reaction to the piece, a delightful email arrived for me from a reader in Maine.   Beautifully written and couched in terms of real old world courtesy, it immediately struck me as being special. 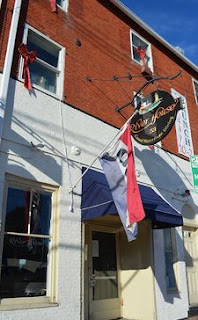 I replied and was surprised and charmed to get a reply.  This was very unusual as generally when I answered queries, it signalled the end of  the correspondence.   After several emails we began an email friendship that has survived the years.  Then Eugene and I arranged to visit our family in New England.  I wrote to John, for that is his name, about the possibility of a meeting.  And this visit to River House Restaurant in Portsmouth was the result.  Think about it!  We had been corresponding for 3 years and had never met.   Many photographs and family pictures had been exchanged, so we would probably recognise each other.  This felt a bit like being in a movie.


Portsmouth was chosen as a halfway point between our home in Seekonk, Massachusetts, a suburb of Providence, Rhode Island and John's summer home on a lake in Nobleboro, Maine.  John had done the research and I quote from an email that I received from him; "My research indicates that Portsmouth, New Hampshire, is about exactly half-way between Seekonk and Nobleboro...... It is 107 miles and 111 miles from the two termini and is easily accessible from Interstate 95, so it is the ideal meeting place."  So Robin would be driving 107 miles (180 kilometres) and John and his wife Jan would be driving 111 miles (185 kilometres).  Oh my goodness!

The road system in American is superb and we arrived in Portsmouth, hardly travel weary.  "Portsmouth is a delightful old seaport with a renovated Old Port section.  Of course,"old" is by U.S. standards."  Again, courtesy of John's email.  Gosh, I do hope that he is not going to mind my quoting him.   There was no time to wander or to do any sightseeing.  The rendezvous was planned for 1pm and we could hardly keep fate waiting. 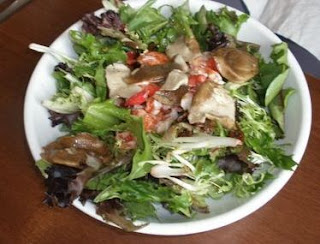 We made our way to the River House at 53 Bow Street.  Bow Street is a beautiful old street that evolved from an early 18th century path that connected the city's two primary waterfront areas. The River House is situated on the waterfront of the Piscataqua River.  Such wonderful names!  Old brick warehouses line the gently curving street, all built after a fire in 1806.  I guess John was right.  It is old by the standards of a young country.  The Brits only consider anything old after at least 1000 years!


The interior of the restaurant is charming with a mellow rustic feel.   There is a deck outside where one can commune with the tugs and the various vessels that are found in a working harbour.  We followed a  charming hostess upstairs to a lovely room with large open windows facing the harbour.  We were wilting in the heat of the New England summer and were very grateful for the welcoming cool that the room provided.

John and his party had not arrived.   Suddenly I spotted a familiar face reaching the top of the staircase.  Yes, it was John and what a special moment!  We greeted each other as old friends, because of course that is what we were.  It was a joy to meet John's lovely wife, Jan and to feel the warmth of her welcome.  Another treat; Barbara, a friend whom we had met whilst she was visiting South Africa, had accompanied John and Jan and we happily renewed our friendship.   Eugene and Robin joined the melée and soon we became a joyous group of friends with so much to talk about and to share. 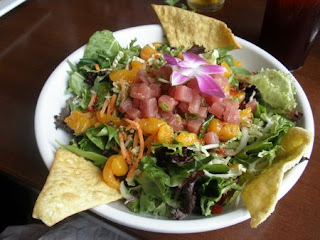 We ordered glasses of crisp white wine and made toasts to life and to special friendships.  The menu is vast and laden with every kind of seafood imaginable.  I chose a 'Lemon Lobster Salad', described as 'Fresh sweet lobster  meat, sautéed fresh shiitake mushroom caps, and roasted garlic chips arranged on mesclun salad greens, dressed with a spicy lemon vinaigrette'.  What a great description and there was no way that I could resist its temptations.  Robin ordered a 'My Thai Salad', a salad of mesclun greens, sushi quality yellow fin tuna served complete with an edible orchid!  John settled for the 'Lemon Lobster Salad' and Eugene, Jan and Barbara ordered various forms of lobster rolls.   We had discovered the joys of New England Lobster dished up in all its varied incarnations.  Oh what a feast we had! 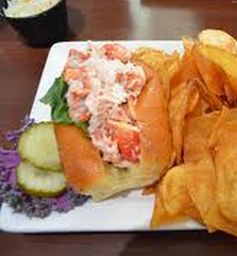 The Shorter Oxford Dictionary defines 'breaking bread' as sharing a meal.  The Urban dictionary goes a step further and suggests that a group of friends may 'break bread and share stories'.  Well, that is exactly what we did.  In time honoured fashion, we partook of a delicious meal together and shared as many life stories as the few hours permitted.  The Lobster Salad was a delight; lots of succulent unctuous lobster meat surrounded by delicious fleshy mushrooms and crisp, crunchy salad greens dressed with a tasty, yet subtle dressing which allowed the flavour of the lobster to hold sway.   The lobster rolls were eaten with great gusto.  Watching these rolls being consumed is quite a sight; quantities of lovely lobster flesh between soft rolls and oozing dressing.  Robin declared his salad delicious and cleared his plate.  What a splendid repast!


A year has passed since our lunch together.   I remember wondering on the long drive back to Seekonk if we would ever meet up again.  Perhaps, but fortunately distance and time count for nothing when one can simply click the send button on an email. 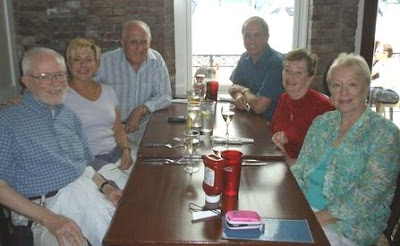 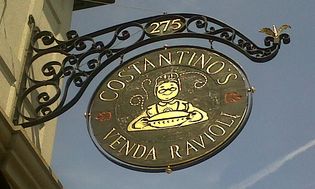 I devoured Mario Puzo's novel, 'The Godfather'.  I adored the films of the Godfather Trilogy and loved the soundtrack, expecially the excerpt that one hears in all three films, the haunting 'Speak Softly Love', which makes the hairs on the back of my neck stand up like an angry cat.   So, when we visited Constantino's Venda Ravioli, an Italian food emporium in the heart of Federal Hill, the 'Little Italy' section of Providence,  Rhode Island, I almost expected to meet Don Corleone.  I loved the warmth of the Italian welcome and the marvellous sing-song lilt to their English accent.   The scene was set, we were going to have a real adventure. 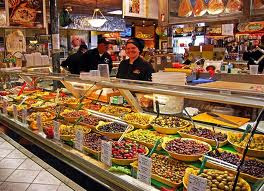 Constantino's is on the flower-decked  DePasquale Plaza at 265 Atwells Avenue.  Italian music fills the square and serves to heighten the sense of promise.   We chose to sit indoors that day to escape the intense heat.   Glass counters, displaying every kind of Italian delicacy imaginable, form the centre of a large space.  Salamis and hams hang from the ceiling.  Behind the counters, knowledgeable staff dispense advice and offer their wares in friendly extrovert fashion.  Food heaven!


We sat at a table on the perimeter of the room with a perfect view of all the goings on .  Being Italophiles, Eugene and I were delighted to find ourselves in this vibrant corner of Little Italy.   A waiter, who introduced himself as Carmine (what a perfect name for a Godfather movie) brought menus and took our drinks orders.  We ordered Limonatas, that fantastic Italian sparkling lemon beverage made with San Pellegrino and lemon juice.  Non- alcoholic, but so refreshing one could drink it all day.   Robin began proceedings with a Doppio, a double shot of espresso.

The menu is divided into 3 sections; Appetizer, Homemade Pasta, and Entrees.  The appetizers, or starters as we know them, were mouthwateringly tempting.  I needed all day as I could have eaten them all.  We decided to order several of these appetizers and share them.  Lunch, unfortunately, was not going to be the main meal of the day, so though we glanced longingly at the homemade pastas and the entrees, we decided to keep them as promises to ourselves for another day. 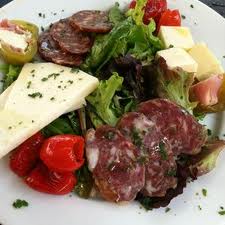 We ordered 'Antipasto alla Venda', described on the menu as; stuffed cherry peppers, peppadews, sweet and hot sopressata which is an Italian dry salami, sharp provolone and fiore di sardegna, a wonderful firm cheese from Sardinia which is made from sheep milk. My contribution to the selection was 'Involtini di Melenzane'.  I love eggplant and this dish is one of my favourites.  But it was going to be a bit different from anything I had ever tasted;  pan fried eggplant stuffed with spinach, ricotta cheese, ground proscuitto and topped with tomato, basil, fresh herbs and finished with parmigiano.  Oh my goodness, I can almost taste it as I write. Then came 'Salsicce e broccoli di rabe';  Italian sweet sausage sautéed with olive oil, garlic, touch of hot pepper seeds and andy boy rabe, a sharp and flavourful broccoli, garnished with pecorino-romano.  To complete our selection, we added 'Insalasta di tonno con fagiolini'; green beens tossed with olive oil, Bermuda onion, diced fresh tomato and lemon dressing topped with albacore tuna. 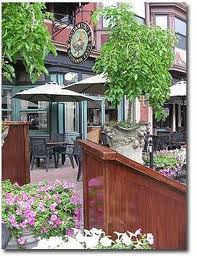 It was a joyous feast!   We ate and ate, mopping up the delicious sauces with homemade bread.  We kept all four dishes in the centre of the table and simply dipped into everything. The produce is fresh, authentic and magically prepared.  Their belief in using only the best ingredients is bourne out by the heavenly food.

Constantino's also has an elegant wine bar and restaurant across the square from Venda Ravioli, Constantino's Ristorante & Caffe.  A dream of crystal chandeliers, gilded mirrors, imported Italian pink marble and romantic works of art, it promises a different dining experience from Venda Ravioli.  Venda Ravioli also offers a catering and deli menu.  Imagine having Constantino's cater for one's parties, or perhaps
just a romantic dinner for two.    It would be sublime.

You have such a lovely way of writing, making one feel, not only as if I had been sitting at the table with you and your lovely friends, but also as though I have eaten the food. Thanks for the trip! Luv luv Michael

Back Chat and I love your comment. It is so generous of you to say such lovely things and to share your enjoyment of the piece.

I agree with Michael. You have a way of transporting your reader to your feast and all one's senses are tantalized by your descriptions. A marvellous feast!

Thank you for your wonderful comment. I am so pleased that you enjoyed the adventure.