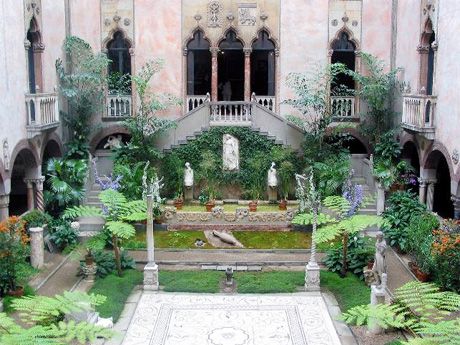 A lovely lazy Sunday in New England and our gang was back in Boston, this time to visit the Isabella Stewart Gardner Museum.  But first lunch at Joe's American Bar and Grill at 181 Newbury Street. 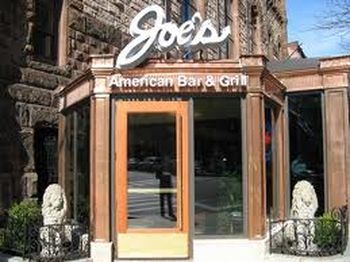 I loved Joe's the minute I saw it.   Big, busy and bustling.  There is a large outside seating area fronting on the pavement, as well as a huge interior guarded by two fierce-looking stone lions and it was packed.  My heart sank!  Robin and James, however, were quite sanguine about the situation.  It was all a matter of getting a number from an amiable gent who was handing them out and then having to wait to be called when a table became vacant.   Well, this was America where competition and capitalism rules and there was no way that they would simply allow anyone to walk away.   I seem to remember that they were serving cocktails while we waited in the queue (line).
We didn't have long to wait and very soon we were shown to our table.   The decor is warm and welcoming with lots of rich coloured wood, banquettes, bars and a beautiful recessed ceiling which is retractable.   In an open plan kitchen, which they term a display kitchen, a whole army of chefs, sous chefs and kitchen staff were beavering away.  All terribly efficient and seemingly at the speed of light.  Looking about, I felt that there was an art-deco influence, even a hint of a busy Parisian cafe at Joe's.  All lovely! 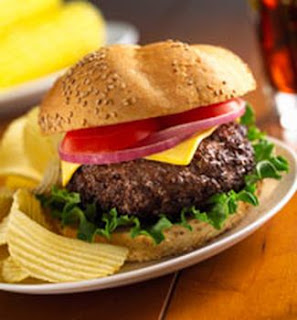 The menu is a delight.  You could more or less order everything under the sun if you wished.  The food is described as traditional American cuisine, focusing on the freshest quality ingredients.  We bypassed the temptations of the lobster combinations, the famous barbecued ribs, the pastas et al and honed in on the section proclaiming 'Joe's Original Great Burgers'.  We all settled for one or other of the famous Joe's Burgers.  In addition to a burger, I could not resist a salad for which I happily and confidently ordered a Thousand Island Dressing.  I had learnt my lesson about dithering over choices with American waiters who are rushed off their feet!

While we waited for our feast, we drank wonderful American versions of the Bloody Mary.  Huge, of course, very spicy as there is freshly grated horse radish in the mix and served with chunky celery stalks peeping out at the top.  Actually, I had tried to negotiate a less potent version and had got as far as minus the horse radish before I ran for cover.

The burgers arrived in a flurry of magnificence.  Half a pound of freshly-ground beef cooked to perfection, served on a toasted poppy seed bun and accompanied by fresh hand-cut fries and onion ring garnish.   We had chosen to add various cheese toppings and our plates were overflowing.   What bliss it all was, juicy, succulent and unctuous, bursting with flavour and crunchiness.  We gave up on conversation and just ate.    Amazing how these beautifully prepared burgers could elicit the same joy as any of the expertly cooked classic dishes we had previously enjoyed!


Onwards!  Time to leave Joe's American Bar and Grill, a bastion of the All-American experience and on to visit Fenway Court, Isabella Stewart Gardner's Venetian palazzo.   A step into the past and into the world of an extraordinary woman.  It would be a fascinating afternoon. 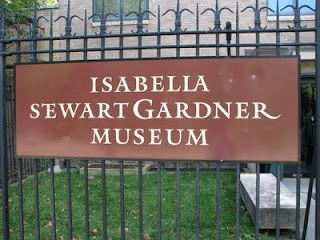 The Isabella Stewart Gardner Museum sits on a comparatively quiet leafy street.  The outside of the large brick building gives no inkling of the treasures it harbours in its bosom.  Through the front door guarded by two stone lions, the second lot of stone animals on guard duty that we saw that day, and through to the other world.  The world of Isabella Stewart Gardner.

But who was Isabella Stewart Gardner?  Who was this person who amassed an art collection that for years was considered the greatest private collection in America and then had a replica of a 15th century Venetian Palazzo built to house it?   Isabella Stewart Gardner (1840- 1924) was a great philanthropist, patron of the arts and art collector extraordinaire.  She and her husband, John Lowell "Jack" Gardner, scoured the world for art and artefacts and ultimately bequeathed the collection and the palazzo to the City of Boston.


She is still jealously guarding her legacy.  She stipulated in an ironclad will that no one could add or remove anything from the collection, nor could they change or rearrange the placement of the works which she solely and imperiously decreed based on her own perception of colour and form.   If her wishes were not honoured, the property and the collection were to be sold and the money given to Harvard University.  Wow!!  It all leaves one feeling quite breathless. 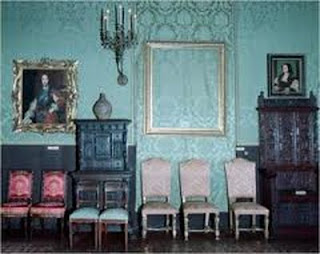 But there was a change!  In the early hours of  March 18, 1900, thieves disguised as Boston police officers entered the Museum and stole 13 works of art.  The thieves had a discerning eye and stole some of the most important works in the collection.  Because of the terms of the will, empty frames remain in homage to the missing works.  Somewhat forlornly, in my opinion, they also wait for their return.  I found it disturbing and rather spooky seeing the empty frames.  The spirit of Isabella is probably furious.

One of the other reasons that I find her so fascinating is that she was completely outrageous and unconventional.  She delighted in shocking staid Boston society and kept the gossip tabloids well supplied with tales of her shenanigans.  Famously, in 1912, she attended an evening of the very formal Boston Symphony wearing a white headband emblazoned with "Oh, you Red Sox."   Pious matrons fainted and it was reported that she 'almost caused a panic'.  This episode is still talked about, even today, as one of her more 'shocking' escapades.  Hooray Isabella!


The most stunning architectural feature is that the building completely surrounds a glass-covered Venetian courtyard.  Three floors of galleries surround a magic garden completely hidden from the city.   The courtyard is alive with every variety of plant.  Flowers bloom seasonally and statues honouring women are placed in amongst this splendour.  One can see the courtyard from almost every part of the museum.  Isabella (I will refer to her as Isabella now, as I feel I know her so well) loved flowers.  She would often arrive at balls and banquets with her arms laden with bouquets from admirers. 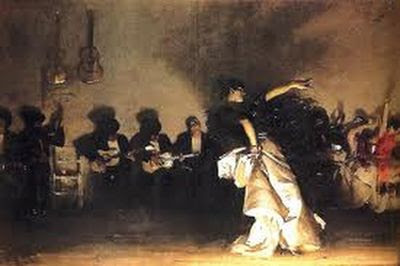 On entering the museum, one passes through an area called 'The Spanish Cloister' and is confronted by John Singer Sargent's magnificent 'El Jaleo'.   In smoky dark colours, the sight of a gypsy woman's wild dancing leaps off the canvas.  A gypsy band is playing and one could be in an Andalusian cafe and part of the full-blooded beauty of it all.   Isabella played a major role in the discovery of Sargent and gave him a studio in her museum that he used for 20 years.  Then the courtyard.  Oh, the beauty of it!   I believe that a day could easily be sent in contemplation of it.   Moving around the circumference of the courtyard one encounters the Blue Room and the Yellow Room.   The Yellow Room has been refurbished and is a somewhat quirky space.  It houses wonderful 19th century art, considered modern at the time the museum was first opened.   The first Henri Matisse to enter an American collection hangs there; a whimsical gentle study of a terrace in Saint Tropez.   Lovely light from the windows enhances the appreciation of the works of art. 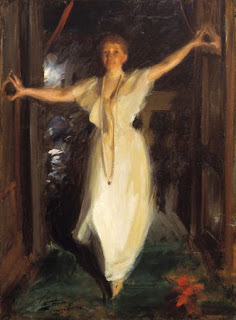 Up a flight of stairs to the 2nd floor. (We are in America remember!  The Ground Floor is called the 1st floor in the New World.)   First, the Early Italian Room and then the Raphael Room, but it is in the Short Gallery that I see the picture 'Isabella Gardner in Venice' by Anders Zorn that I absolutely adore.   A white dress, with arms flung wide; I feel that it captures her free and joyous spirit and is my favourite study of her.  It is in the Dutch Room that one sees empty frames.  They are a frightening and disturbing sight.  What a heinous crime was perpetrated on that night in 1900.   What on earth could have happened to these treasures?   They are far too famous to have been sold on the open market.   I have an image of mad collectors gloating over their beauty in vaults hidden from the world.

On the 3rd floor one encounters The Titian Room and the amazing 'Rape of Europe' painted by Titian in 1562.  This is considered to be one of the most famous pieces in the collection and is reputed to have been Isabella's favourite. A stroll through the Long Gallery with its window from Soissons Cathedral takes one to the Gothic Room and a magnificent Giotto, 'Christ Child in the Temple'.  In this last room, one finds a Portrait of Isabella Gardner by John Singer Sargent.  It is so totally different from the Anders Zorn portrait.  Here she is portrayed in a black dress, all corsetted and correct, her hands lightly clasped in front of her, but her smile betrays her roguish spirit. 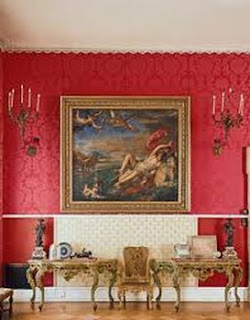 In honour of its founder, the museum offers free admission and special events for anyone named Isabella.  What a lovely bit of whimsy!  And, as of January 2009, everyone receives free admission to the museum on their birthday.   I am sure that Isabella totally approves.

P.S   An interesting feature of the museum is the light.  It is muted as one would expect to find in a private palazzo.  Certainly not the lighting one is accustomed to in public museums.  Many works have been placed near windows to allow natural light to illuminate them.  Isabella refused point blank to allow bright museum light in her palazzo. Well, she was no ordinary mortal and this is no ordinary museum!
P.P.S   Nearly 70 works of art in her collection were acquired with the help of celebrated art dealer Bernard Berenson.  She was his major client.


P.P.S   It is generally supposed that the author, Henry James, modelled his character Isabel Archer in 'Portrait of a Lady' on Isabella.  His brother, psychologist and philosopher, William James, was captivated by her and was a frequent guest at her lively salons.  His nephew, William James, painted 'Portrait of a Lady' which is generally thought to be Isabella Stewart Gardner.  A portrait that he painted of his uncle, author Henry James, is in the Isabella Stewart Gardner Collection.  One could say with reasonable certainty that Mrs Stewart Gardner held the men of the James family firmly in her thrall.

I found it so hard to leave the Museum and Isabella.   I hope that all those of you who travel with Back Chat will fall in love with her too. 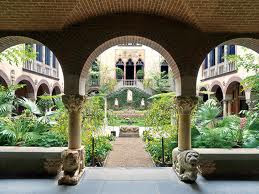 Yet another lovely piece. That Singer Sargeant is breathtaking. And yes please I will have a Bloody Mary!

What a wonderful comment. Your opinions are so important and so fulsome and warm blooded.

I totally agree that the Singer Sargent is breathtaking. The Bloody Mary is amazing, but not for the faint-hearted. I hope that you get to sample this American delight.

Thank you for your generosity of spirit.

Joe's is really one of my favorite restaurant. I really love the hamburger that they serve really yummy to the max!

Thank you for commenting on Back Chat. It is really great to hear from readers that have had good experiences.

Joe's is very special and I look forward to visiting there again, I think for another hamburger.