Interview With A Freedom Fighter. 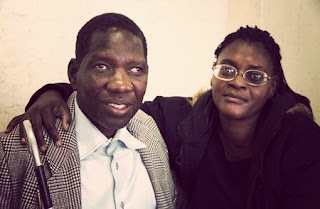 In Sea Point , a suburb of Cape Town, there is a promenade that hugs the twists and turns of the ocean.   It was along this walkway that I regularly passed a blind man, sitting on a bench.  Always the same bench.  What struck me particularly was the innate dignity of this man.  Always neatly dressed, he sat quietly opposite the ocean he could not see.  A slow drawn out 'Thank you' or 'Bless you' if I dropped a coin into his white cup or proffered cap and I would be on my way, relieved that he was alive and well.

One day he was no longer there.   I wondered and worried.  Then a series of events unfolded. I learned  that brother and sister angels, Jonno and Nicole Sherwin, had rescued him from penury and beggarhood.  They had set wheels in motion that would lead him to learn a trade and thus, ultimately to a better life.    Within days, photographer extraordinaire, Mia Feinstein and I were on our way to the South African Society for the Blind to meet, interview and photograph Everson Ngwenya, Liberation War Hero. 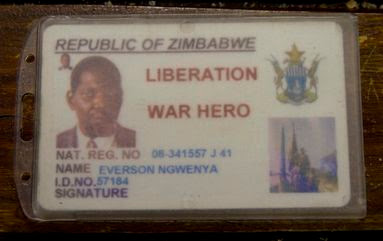 We meet in a dining and recreation room of the building that houses this amazing society.  He is accompanied by his wife, Lydia and his nephew David.   It seems almost other worldly seeing 'my blind man' here.  Dressed in a crisp pale blue shirt and tweed jacket, he carries himself with dignity.   We sit down together to talk about his life.  It is a story of bitter hardship and distant hope.  Very much an African tale.

Everson Ngwenya was born in 1960 in Northern Matabeleland, Rhodesia, of Ndebele origin.   Rhodesia was to become known as Zimbabwe on the 1st of June, 1979.   He interrupted his schooling when he was 17 to go to war to fight for a free Zimbabwe as did so many other young men of his generation.   Training a freedom fighter was a very serious business and he was sent to Moscow to learn the tools of a deadly trade.  A stint in Tanzania and then he was sent to do battle as a liberation freedom fighter in the Zimbabwe People's Revolutionary Army (ZIPRA).  Lydia is all the while translating for Everson.  He does understand me, but I think he is far too emotional to answer in English.  His anguish is all too apparent. 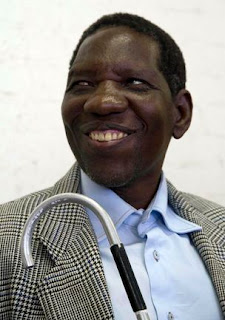 I ask about his blindness and he tells how he was nearly fatally injured when on a combat mission against Mugabe's ZANLA forces in Gokwe, he received a bullet to the head.  The bullet fractured the front of his skull and for many weeks he lay unconscious and fighting for his life.  But, miraculously, he survived and spent the next 22 years enduring painful treatment at the hands of Cuban doctors to save his diminishing sight.  This battle was eventually lost and in 2000 he was declared blind.

The following years were marked by hardship, poverty and near starvation.   His wife Lydia made barely enough money as a domestic worker to feed their family.   Mugabe's brutish thugs continually harassed and threatened them.  In desperation, in 2008, they fled Zimbabwe and made for South Africa and what they hoped would be a safer and better life.

The dangers in South Africa were of a different kind.  Tear gas used during the xenophobic attacks in the townships caused their little girl, Anita, to develop a lung disease and she has to be cared for in St Joseph's Home. The status of asylum seekers is always perilous and a blind asylum seeker was going to find it a great deal more difficult.   So this brave and gentle man was reduced to having to throw himself on the mercy of strangers and, having to withstand all weathers, in his own words become 'a humble beggar'. I asked him why he chose that particular spot and he answered quite simply that 'God had chosen that bench'. 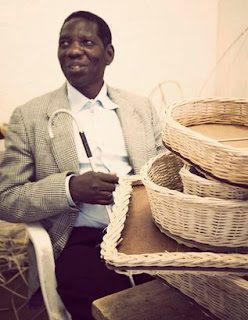 It was there that his angels found him and subsequently relocated him to The Cape Town Society for the Blind where he is proudly enrolled in a one month course of basket weaving and life skills.  He has a renewed dream of a future in which he will be able to provide for his family using the skills that he is acquiring.  He describes himself as 'feeling alive again for the first time since his accident.'  He has brought several baskets  to the interview that he has previously made.  In the course of our visit, we watch blind fingers flying around the skeletons of baskets, weaving the intricate patterns.   For me, it is an epiphany of sorts, observing that there can be an almost joyous quality of life after losing one's precious eye sight.

This remarkable and tragic story resonates deeply.  There are so many sad, displaced and hungry people in this melting pot of cultures and countries that is Southern Africa.  One hopes and prays that there is indeed a better life awaiting them. 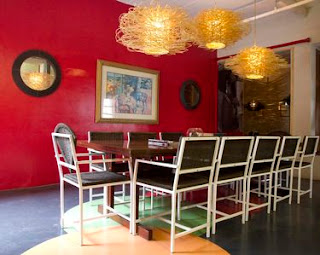 Coffee shop that is decorated by the blind and partially sighted at the South African Society for the Blind
In the words of the Chinese Proverb:
'You can give a man a fish and he will eat for a day.  Teach a man how to fish and he won't starve for his entire lifetime.' 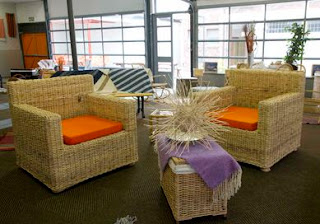 Craft shop at South African Society for the Blind.
If you are interested to read more about this remarkable man, do leave a comment on Back Chat at http:www.leslieback.co.za or email me at les@leslieback.co.za .

You may also email his 'angels' at:  jonathan@gingerandlimeconsulting.com
nicole@nicolesherwinevents.com
Or go to his Face Book page at
http://www.facebook.com/pages/Everson-Ngwenya


With grateful thanks to Mia Feinstein for the photographs and for so generously sharing her remarkable talent.
Posted by Leslie Back at 19:16

Oh wow Leslie - trust you to turn this into a story of hope! How wonderful that he will now learn skills to occupy his time and earn him a living. Luv Michael

Leslie, YOU are the angel here. Thank you so much for taking the time, effort and love to meet with and interview our special Everson. Every effort helps in some way and you have written from your heart and for that we are truly thankful.

Thank you Nicole for these very generous and sweet words. I hope that there will be some benefit for Everson and Lydia