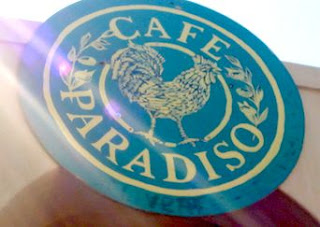 Richard Griffin has been at it again.   He has made Café Paradiso at 110 Kloof Street, Cape Town, his own.  This rather cranky old lady has been refreshed, refurbished, revamped and revitalised and under the unique Griffin imprint has become a special place again.

For those of you that have just arrived from Mars, Richard Griffin is the wizard who creates restaurant experiences that are somewhat different, somewhat other worldly but always lovely.  He is the wunderkind behind Madame Zingara, Bombay Bicycle Club, Sidewalk Cafe and the newly reopened Cafe Mozart.( See Back Chat's articles on Sidewalk and Mozart and you will see what I mean about different.)

Over two decades ago, Frieda found this lovely old house and converted it into one of the most popular restaurants on the slopes of Table Mountain.  Serving Mediterranean food, she attracted people from far and wide eager to savour the delights that emerged from her kitchen.  Frieda eventually moved on and the house played host to a series of restaurateurs.  The name became and has remained Café Paradiso and Richard Griffin, as is his wont, has kept the old established name.

Read more »
Posted by Leslie Back at 15:05 No comments: Links to this post

Email ThisBlogThis!Share to TwitterShare to FacebookShare to Pinterest
Labels: Back Chat Eats Out 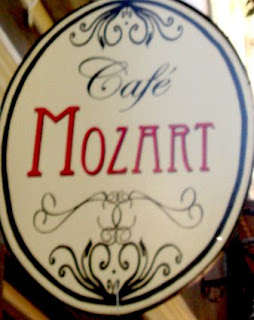 Café Mozart at 37 Church Street, Cape Town, has a new lease on life.   Richard Griffin, grandmaster of   theatricality, has incorporated it into his family of restaurants.   He has revamped, refurnished, redecorated, re - everything and now the place hums with his magic.

Café Mozart has held court for over 30 years in a beautiful part of Church street.   Sunlight filtering through the trees casts a dappled pattern onto cobblestones below whilst stall-owners of the antiques street market compete for custom.   The Café is housed in a lovely old heritage building which has been part of the business scene for many years.  In 1939, a locksmith traded there.  Imagine what Cape Town CBD must have been like then!

Read more »
Posted by Leslie Back at 17:27 No comments: Links to this post