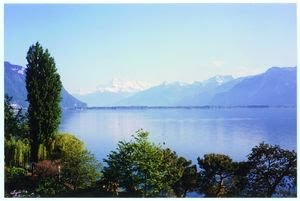 Montreux, the queen of the Vaud Riviera.   Pristine, ordered and beautiful beyond words and of course everything working like clock-work in true Swiss fashion.    So different from other 'Rivieras' that we had visited in the course of our travels.

Eugene and I had entered another world and another culture.   Different from the laid back, slightly chaotic and mildly eccentric French and Italian Rivieras.  We love them all.  Back Chat invites you to join us on this adventure.   If you need to know more, post a comment on Back Chat or email me at les@leslieback.co.za
I would love to hear from you.
MONTREUX 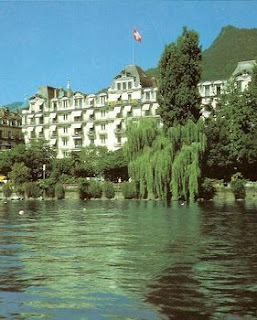 We had booked at the Hotel Eden au Lac in Montreux.   A lovely 100 year old building with Victorian architecture, situated on Lake Geneva and about two minutes from the centre of town.      Although old, it had been renovated and had Louis Seize style furniture in the rooms.     Pristine, ordered and beautiful and of course everything working like clock-work in true Swiss fashion.   We had entered another world and another culture. 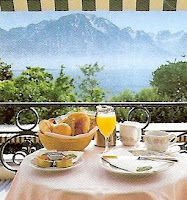 The view from the balcony of our room was breathtaking.    Below snaked the Promenade des Fleurs, where the colours of the trees and the flowers blended, creating an exquisite tapestry.  Beyond that, the clear blue expanse of Lake Geneva and beyond that, snow-capped mountains which were mirrored in the lake.  Could anything be more beautiful?

Montreux lies on the north-east short of  Lake Geneva.  It is a municipality in the district of Vevey in the canton of Vaud.  The French-speaking canton of Vaud is Western Switzerland's most populous state.  Because of its exceptionally mild climate, Montreux is considered the queen of the Vaud Riviera.


Many illustrious and celebrated people have chosen to live in Montreux.   Charlie Chaplin and Freddie Mercury lived on the Vaud Riviera, while Vladimir Nabokov, father of Lolita, lived permanently in a Montreux hotel.    Jean-Jacques Rousseau, Tchaikovsky and Igor Stravinsky lived and worked there.   There is a big statue of Freddie Mercury in the main square of the town, the Place du Marche.    The famous Montreux Jazz Festival that takes place every July is a world famous music happening. 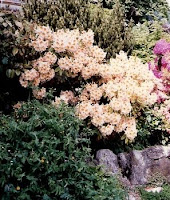 Just east of Montreux is Switzerland’s best known castle, the Chateau of Chillon and we could reach it by walking along the flower- lined waterfront promenade.   Armed with a map, scrupulously marked by our concierge, we set out.    It is about a 40 minute walk along this beautiful walkway.     Naturally there is an ordered look to the beds of jewel-coloured flowers.    It is Switzerland after all, no matter how French they purport to be.   Swans glided serenely by, seemingly aware of their consummate beauty and grace.    We encountered some on the pathway, drying and preening their feathers.   Then the sight of a black swan.   Our own enchanted ‘Swan Lake’.

The Chateau of Chillon is a moody, feudal fortress with turrets and towers and buttresses that have survived centuries of upheaval, including, now, the vibration of express trains hurtling past their doors.   The history and brooding atmosphere of it all, is fascinating.   It stands on Chillon Rock and consists of many independent buildings.

There are spooky dungeons that Lord Byron made famous in his poem, ‘The Prisoner of Chillon’.   The actual prisoner of Chillon was a Genevoise monk and politician, Francois de Bonivard, who was imprisoned there from 1530 to 1536.   Much of this time he was chained to a pillar, the fifth pillar from the entrance.

Byron was touring the area with the poet Shelley in 1816 and heard the story.  He signed his name on the third pillar.   Every year Lord Byron’s epic poem lures several hundred thousand visitors to Chillon.  Centuries later, Jean-Jacques Rousseau wrote of Bonivard’s suffering.

The architecture of the underground rooms, which are at water-level, is reminiscent of the great Gothic cathedrals of the 13th century with high vaulted ceilings and mighty pillars.  There is the amazing stillness of the great cathedrals which further served to intimidate us.  All intriguing and even spine-chilling.

There are four formal great halls in the castle.  Again the high vaulted ceilings which must have lent such an aura of grandeur to the sumptuous banquets that were held there.  The windows look over the amazing sweeping landscape of Lake Geneva.

There are courtyards, ablaze with flowers, now used for performances and events.  We visited Chillon’s chapel and some private apartments, all starkly and sternly furnished.

Still so much to see, but by this time our feet were aching.  We decided to take a bus back to our hotel.  We had been told that you could set your watch by the punctuality of these buses.   Well, you can!   A bus arrived exactly at the published time and in a haze of efficiency we were transported to our hotel.   A world away from our experience on the Piazza Michelangelo.

Time to sample some Swiss specialities.   Of course everyone knows about fondues, but eating one in Switzerland is to experience quite another dimension of enjoyment.
Many restaurants specialise in fondue and we chose one that the hotel recommended, and enjoyed an evening of utter indulgence.   Eugene chose a Fondue Bourguignonne.  This involves dipping pieces of meat into boiling oil.   When it is cooked, it is then flavoured with one of the many savoury sauces provided.   I had a cheese fondue and decided not to think of calories and to just allow myself to revel in the sheer enjoyment of it.   We shared a fruit tart as a dessert and rounded off the meal with a small cup of Swiss coffee.
Lausanne is 22 kilometres south east of Montreux.   This lakeside city is the capital of Vaud and the headquarters of the International Olympic Committee.   The first thing we did was to make our way to the Musee Olympique on Avenue de Denantou.    Full of information and memorabilia for the sport fanatic.  Eugene loved it.

There are wonderful universities and private schools in Lausanne and of course the very exclusive ‘finishing schools’.  Any aristocratic young lady worth her salt would be sent to one of these establishments to learn how to become the perfect wife and hostess.   We wandered past one of these schools and frankly, it looked like a prison with barred and shuttered windows.    We wondered whether the occupants were being protected from evil influences of the outside world, or were the powers- that- be making sure that their charges did not escape and rush back to daddy’s castle?

Lausanne is also a gastronomic destination of note.   And it was in Lausanne that we enjoyed the best rosti we had ever eaten.  This dish of grated potatoes fried in oil or butter is a typical Swiss accompaniment for meat.   We ate ours with Swiss sausages.   Crisp, crunchy rosti, wonderfully flavourful veal sausages with onion sauce and we were utterly transported.

After lunch, a gentle walk along the mile-long lakefront with its delightful parks and gardens and many more restaurants.   In one of the parks there is a flower clock that appears to work on the same principle as a sundial. We checked our watches and it was spot on.    No surprise.   Swiss watchmakers, even of the gardener variety, would never tolerate any form of timepiece that did not keep perfect time.

We spent further idyllic days exploring Montreux.   Up the hill and away from the lakeside is the old town, the Vielle Ville.    It was quite a trek climbing the steep hill.    We found ourselves in a maze of narrow streets with 18th century stone buildings and houses.   There were decorative wrought-iron balconies and winding stairs that went on forever.

The pace of life slowed down.   The locals, who live and ply their trades in the village, appeared to move much more slowly than their compatriots down the hill.   They greet one cheerily with a lack of Swiss rigidity and formality.   We spent happy hours wandering through the narrow streets, looking at art galleries and rummaging through antique and artisan shops.

Souvenir shops, selling cuckoo clocks of all shapes and sizes, abounded.    Beautiful embroidered cloths and blouses would make a more convenient package to fit into a suitcase.

Switzerland is a country of chocolate makers and chocolate eaters.   It is said that the average Swiss consumes more than 10 kilograms of milk chocolate per year.    We had found such a variety of chocolate confections in our travels in and around Montreux.   The old village has wonderful little shops selling chocolate and chocolate delicacies.   Just the smell emanating from these confectioners made it impossible to pass them by.

Our next destination on this European odyssey would be Paris.   We felt sad that we were leaving this place of flowers and colour.   We gazed across Lake Geneva at the snow-capped peaks of the French Alps.  Would we ever again encounter such splendour?
But Paris beckoned.  It was time to move on.